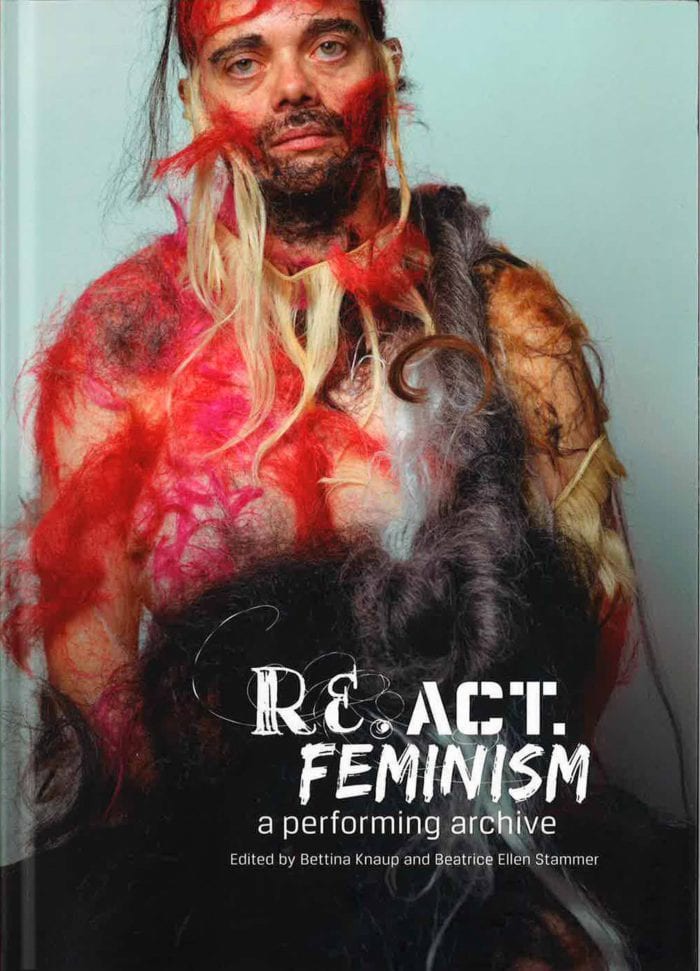 This comprehensive, thoroughly researched archive offers a compelling argument for re-locating feminism (in all its forms) as a fundamental force, shaping the political dynamics of performance art from its formative years up to the present. After three years of project development, seven exhibitions across Europe and numerous events – we are very happy to present […] 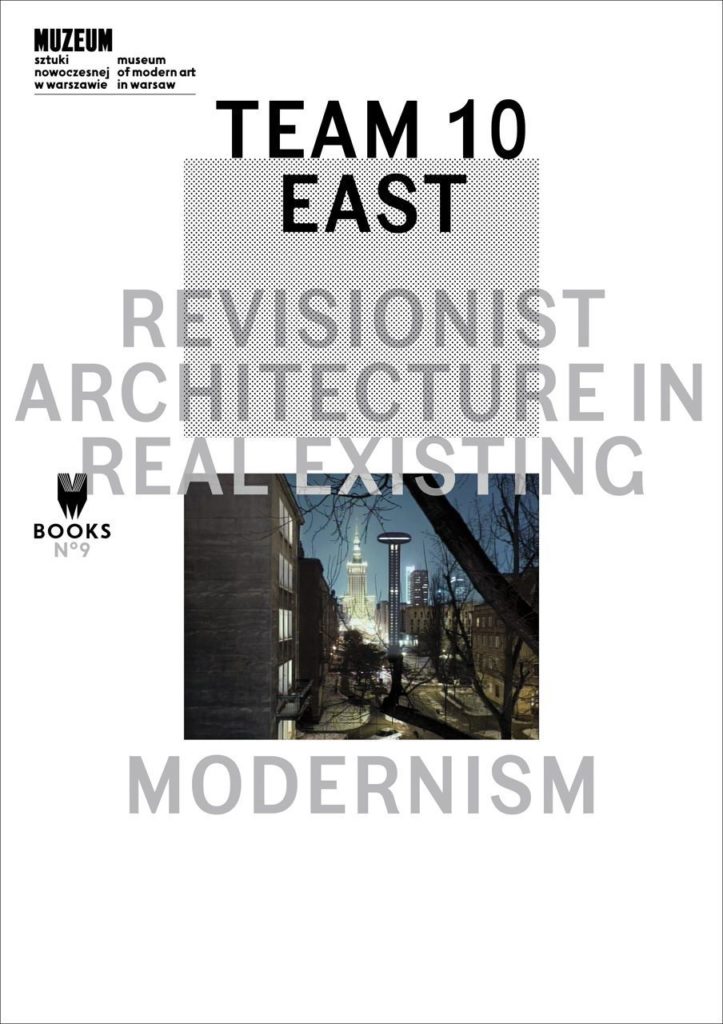 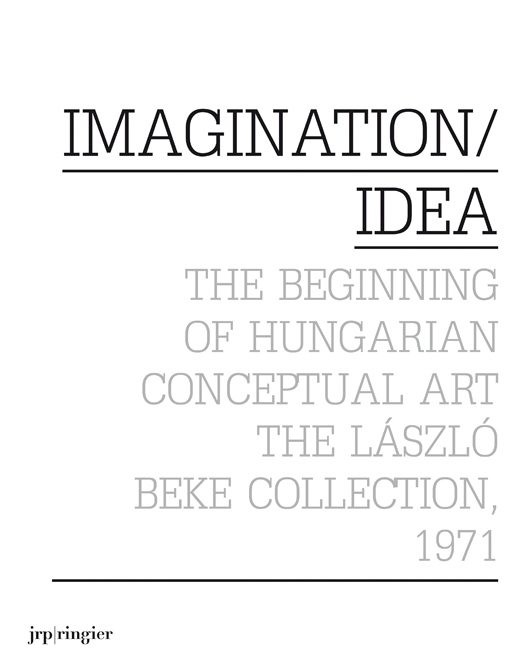 In August 1971, László Beke, renowned Hungarian art historian and curator of several progressive art events of the 1970s, sent out a call to 28 artists, asking them to submit sheets that would fit into A4 document folders, following the concept: WORK = the DOCUMENTATION OF THE IMAGINATION/IDEA. Beke arranged and preserved the sheets he […] 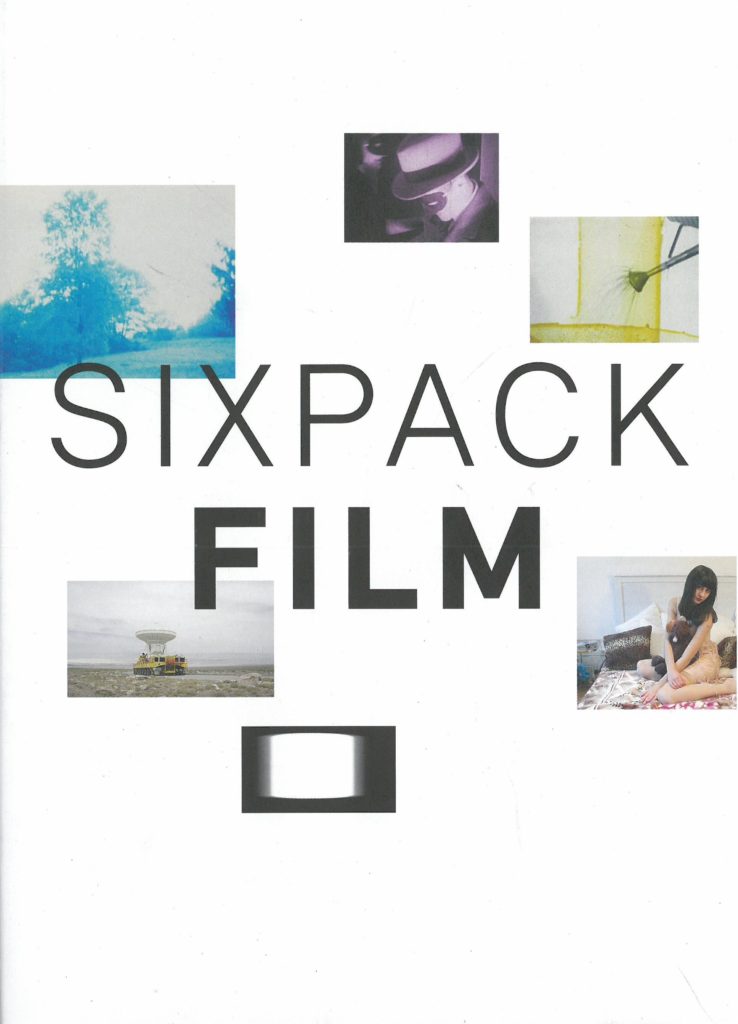 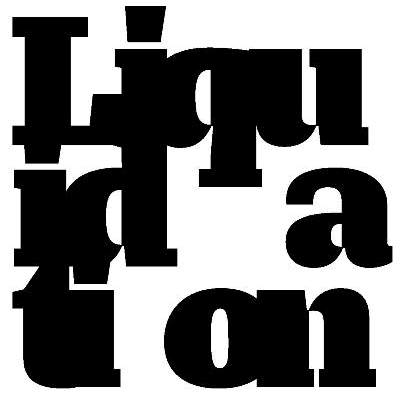 The publication Give Citizen a Chance is the result of the fifth Central European Forum, held from 15 to 17 November 2013 at Pisztory Palace in Bratislava. This conference was organized by the Bratislava non-profit Project Forum together with the Prague-based Václav Havel Library as part of events marking the anniversary of the 1989 Velvet […] 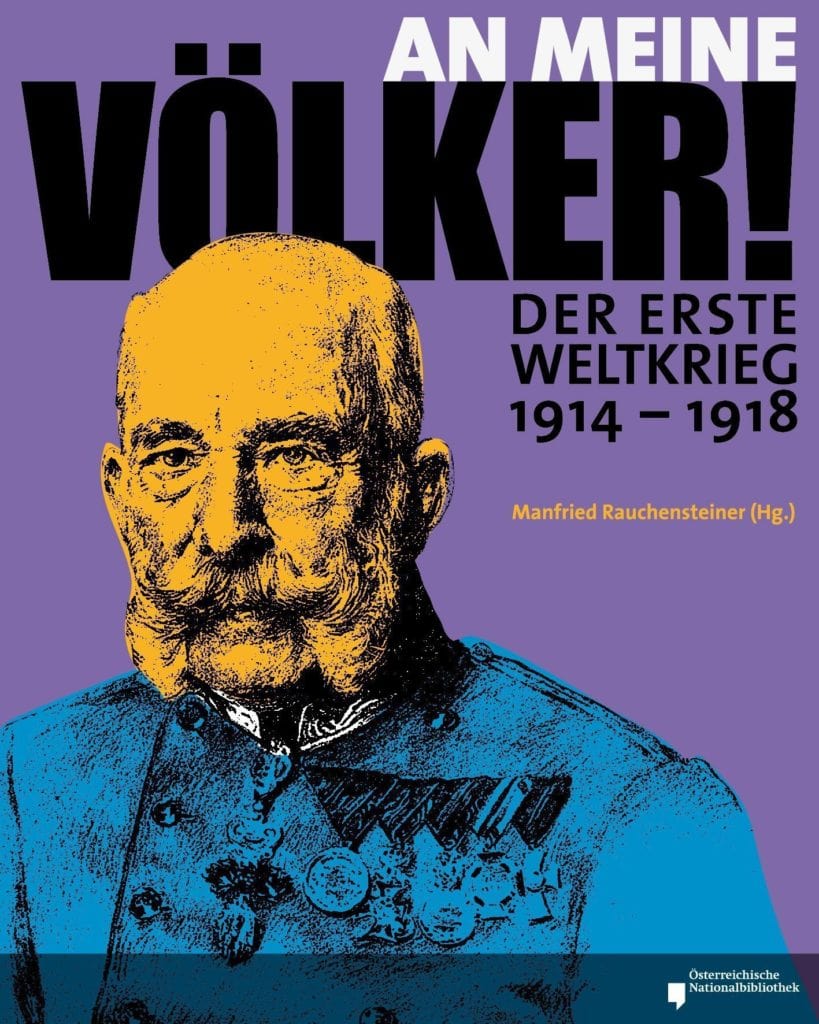 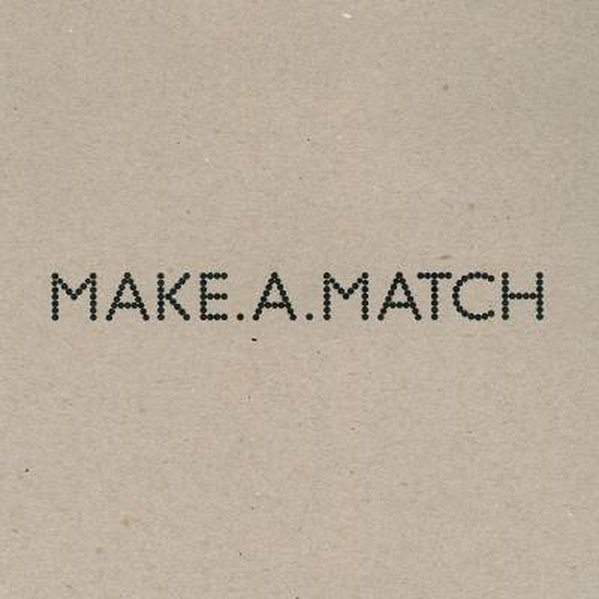 MAKE.A.MATCH (initiated by Katharina Schendl) gave artists Carte Blance to develop a project, but with one restriction: they have to collaborate with another artist, a stranger chosen by the curator. What happens if this premise is put into action? What are the strategies the artists will use in these “arranged marriages”? Ana Prvacki + Magda […] 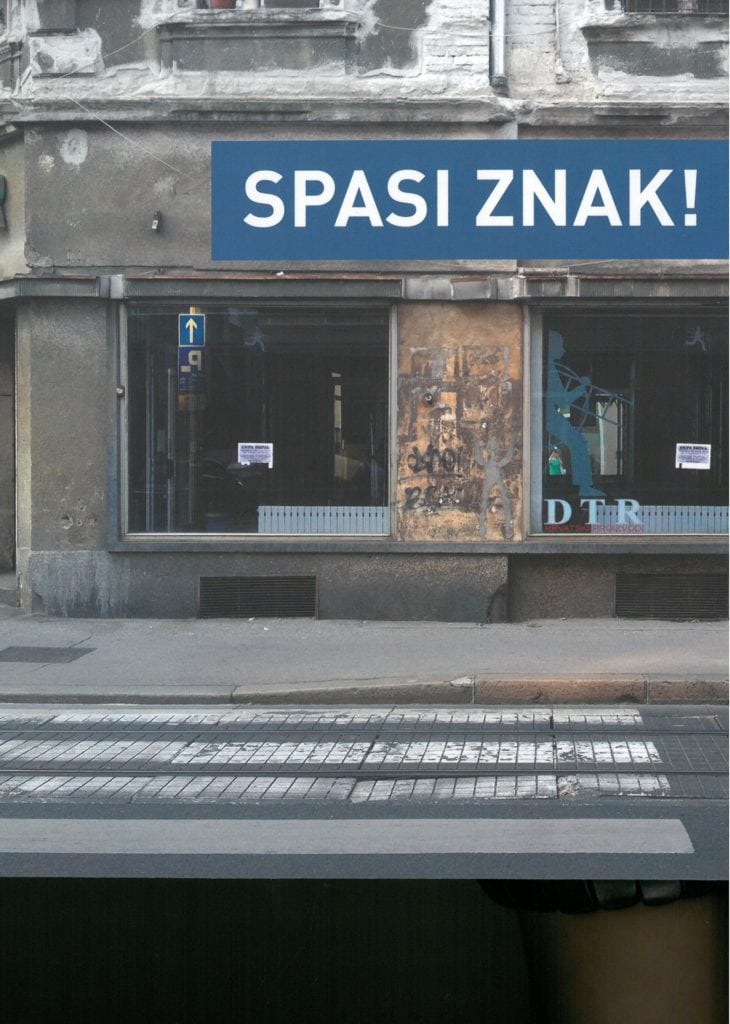 Spasi znak! (Save the sign!) is a project proposing the conservation and protection of old factory signs, writings and logos in the Zagreb area. After the collapse of various factories and industrial plants that once were among the most important elements of development and economic prosperity in former Yugoslavia, the factory signs are often the […] 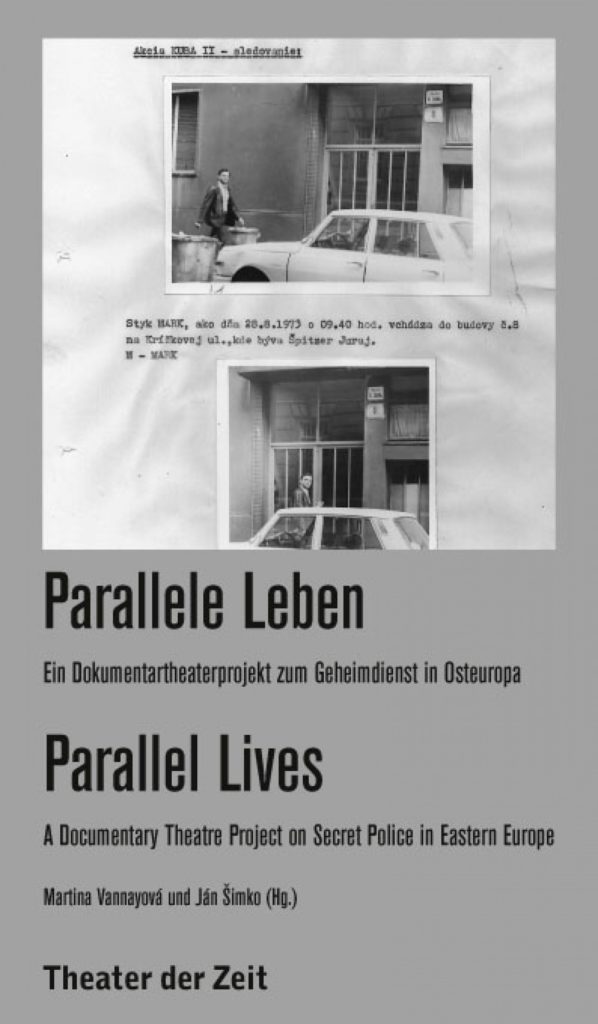 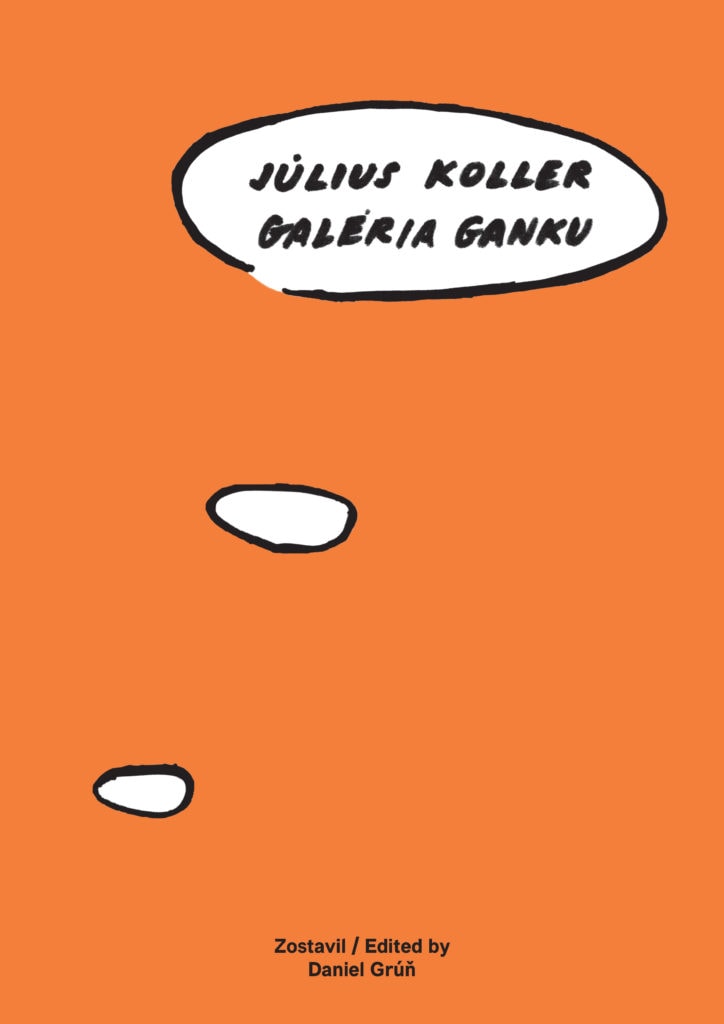 Július Koller, UFOlogist, sceptic and game-player, is considered the key figure in 20th century Slovak art. The Ganek Gallery (Galéria Ganku) is a book devoted to reconstructing one of his most important artistic projects. This legendary gallery was situated on a mountain peak, highly regarded by climbers, in the High Tatra range. Although no works […]

Was bleibt. Fragmente einer fortwährenden Vergangenheit / What remains. Fragments of a continuous past 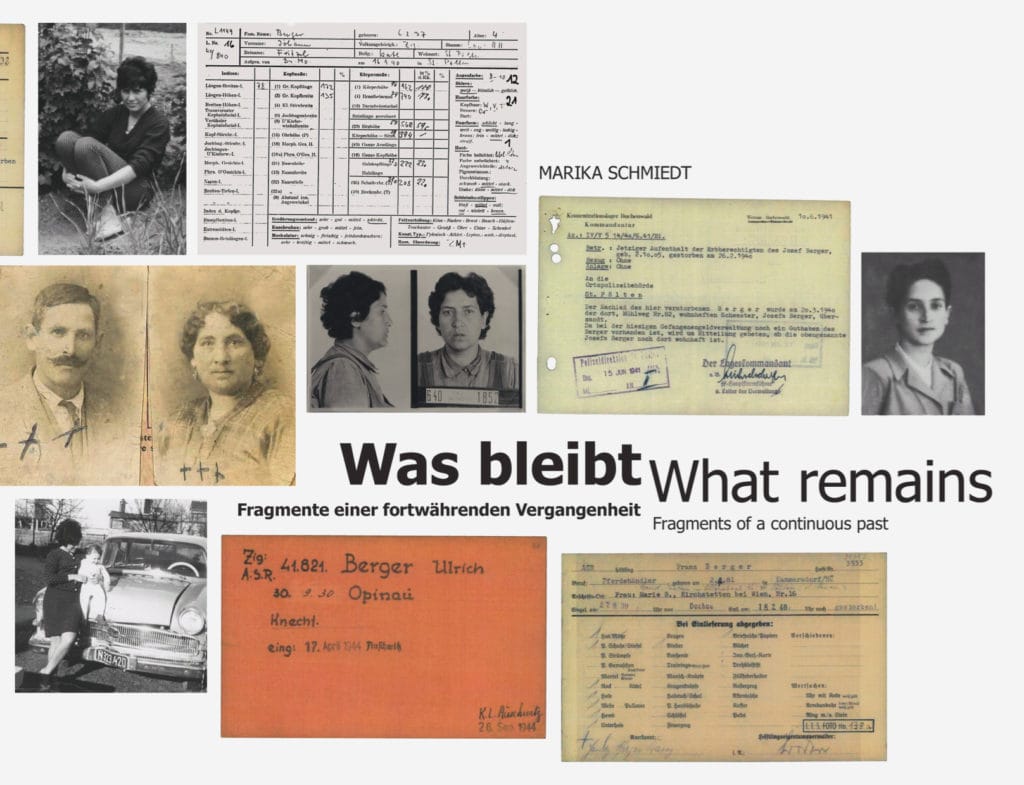 In the framework on the Nazis’ racial ideology Roma and Sinti were recorded, deported into extermination camps and finally murdered. The author‘s family history allows the readers to understand that these were real persons, humans with their own unique biographies and histories of repression. It also aims at showing the consequences that persecution and murder […]

Syria’s War. A Journal of Pain 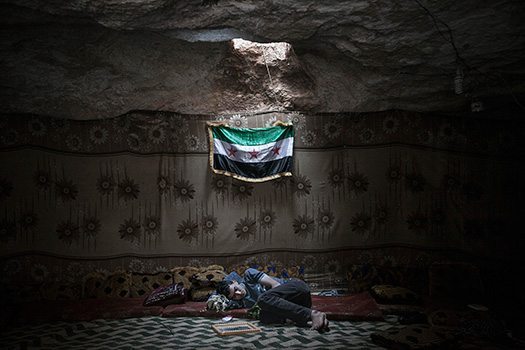 In a series of photographs captured in Syria on the territories controlled by rebel groups, Narciso Contreras provides us with insights into everyday occurrences of the Syrian civil war. The scenes of suffering, pain and destruction from the midst of battles between Assad’s army and the rebel groups bear witness to one of the worst […] 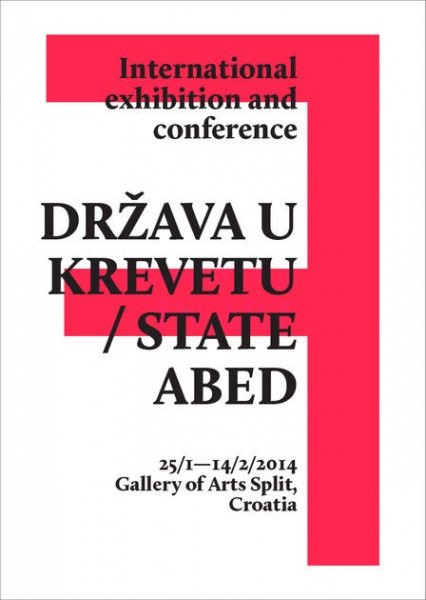 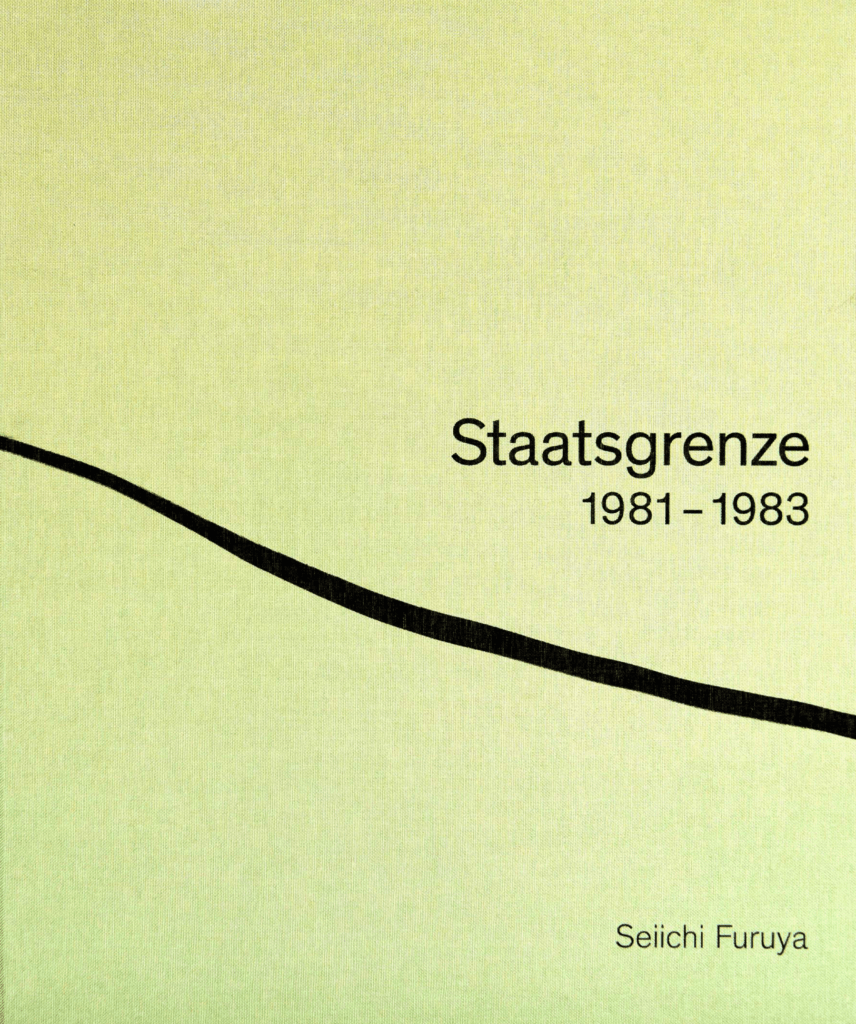 Between 1981 and 1983, Japanese photographer Seiichi Furuya, based in Graz, took photographs at the Austrian border towards the former Eastern bloc nations. In contrast to the media attention devoted to the inner German border and the division of Berlin, Furuya was searching for images in the inconspicuous and at times even idyllic border territories […] 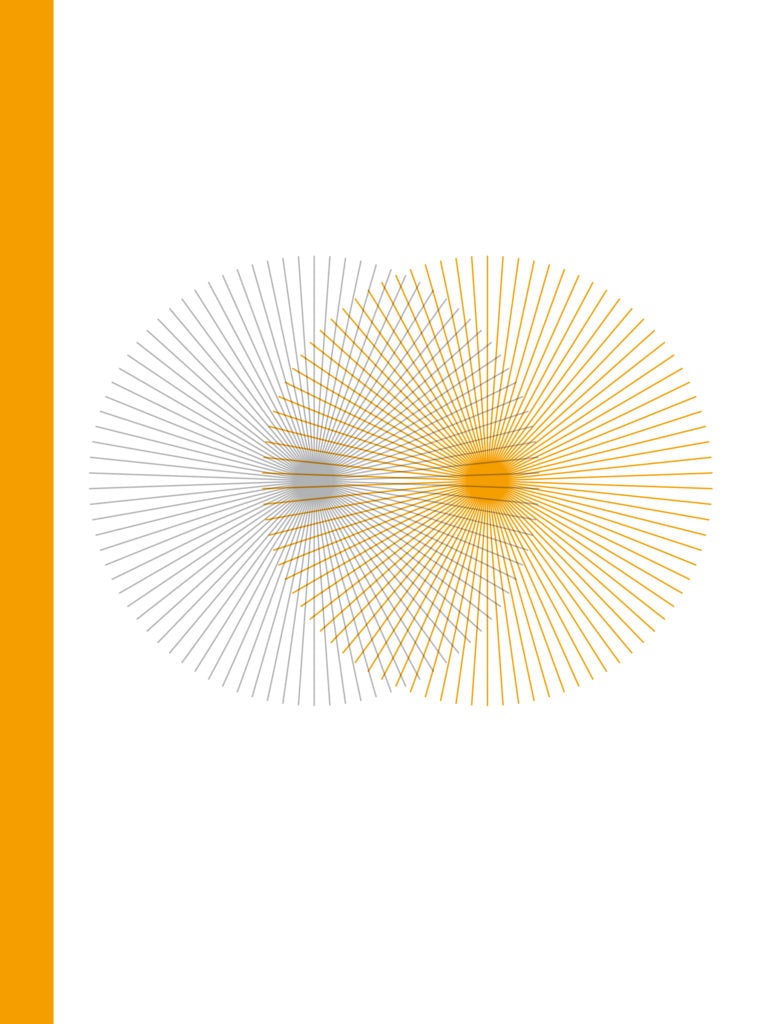 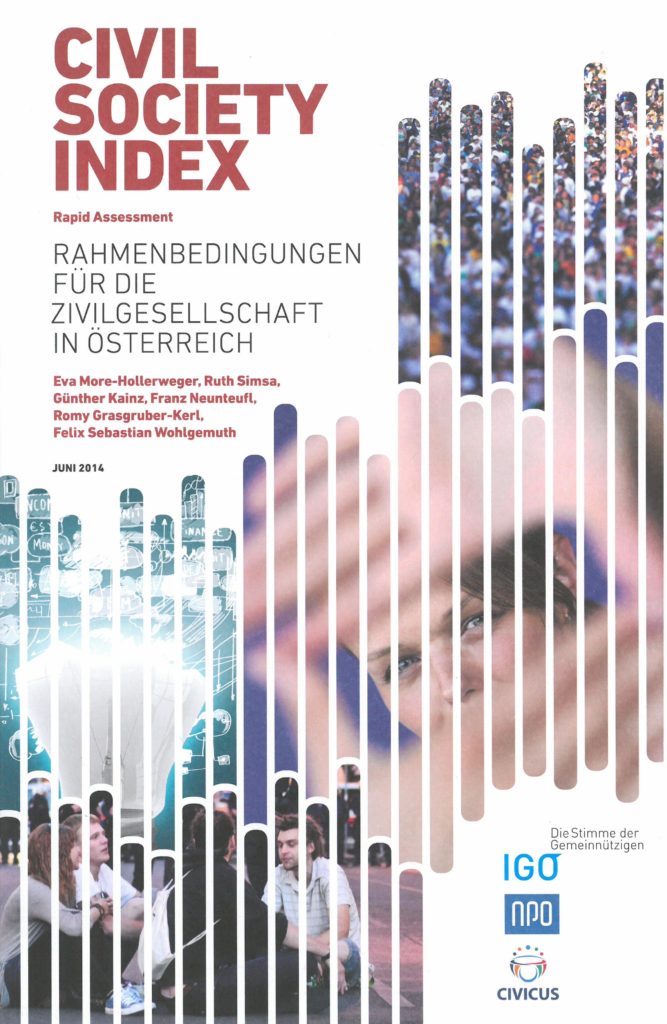 After a year of intensive collaboration between the Competence Center for Nonprofit Organizations and Social Entrepreneurship of the WU Vienna and CIVICUS, the research project Civil Society Index was completed in early June and presented its results on 16 June 2014 at a press conference on the premises of the Austrian National Parliament. Within a […] 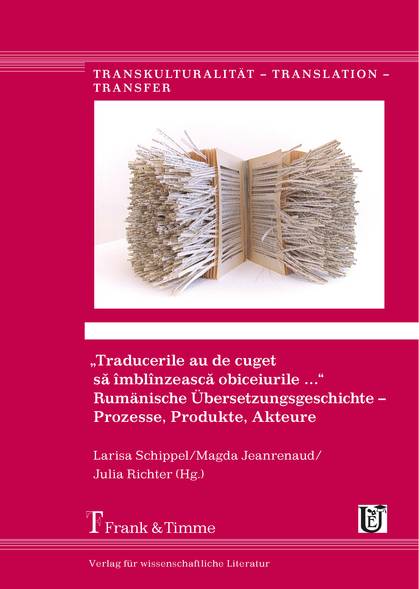 The history of translation is a transnational phenomenon that needs to be examined beyond language boundaries, although the translation process as such takes place between two languages and has been conceived in national terms for more than one hundred years. As part of this transnational system of translational activity, Rumänische Übersetzungsgeschichte (Romanian History of Translation) […] 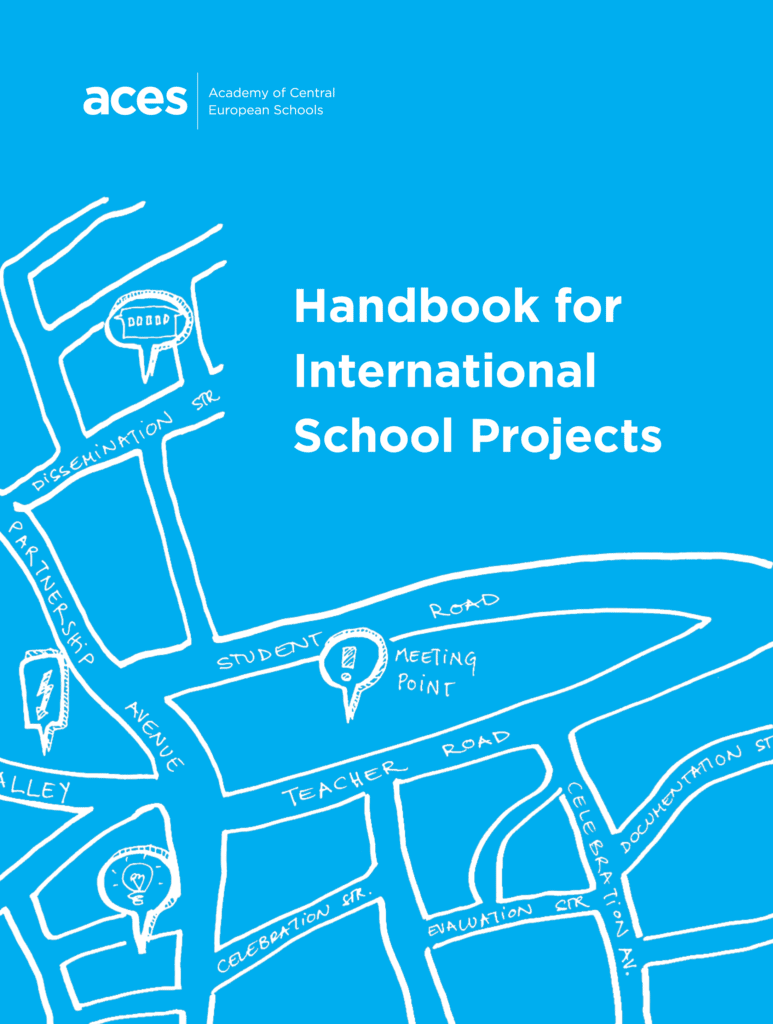 The handbook is a new resource for teachers and students, providing a wide range of information, advice, ideas and good practice examples for the successful launch, management and realisation of international school partnership projects. Whilst the book’s examples stem from the school exchange project aces – Academy of Central European Schools, findings and content are […] 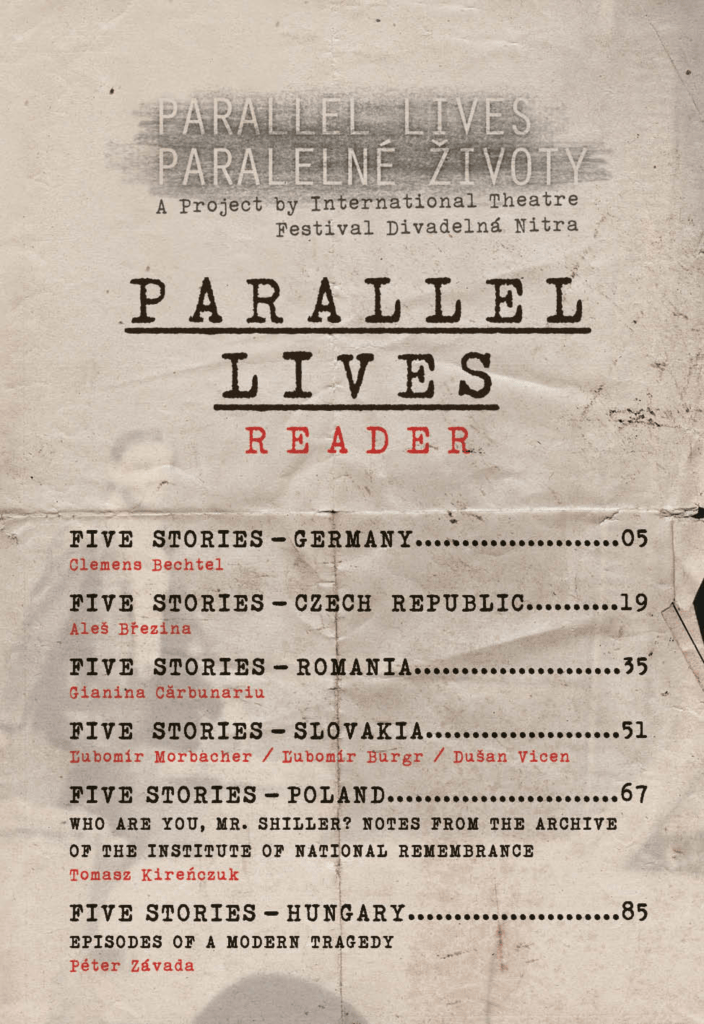 The Parallel Lives reader includes five stories from each country participating in the project. They are stories that the creators came across while doing research in the archives of communist secret police organisations and that they have composed in an original way. Diverse stories of people whose lives were fatally influenced by the secret police are […] 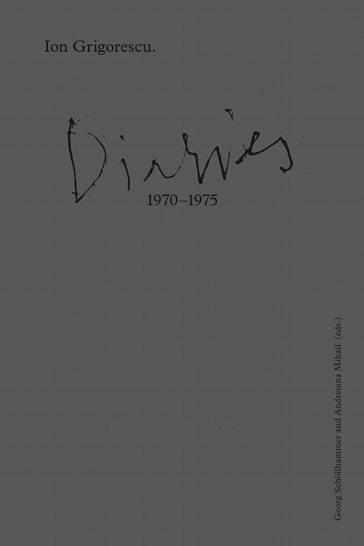 Ion Grigorescu is one of the seminal visual artists of his generation in Eastern Europe. In recent years, his complex body of work has attracted increasing attention in the West, entailing a reading of his oeuvre through the prism of canonized Western art histories. This first English edition of his diaries from the crucial years […] 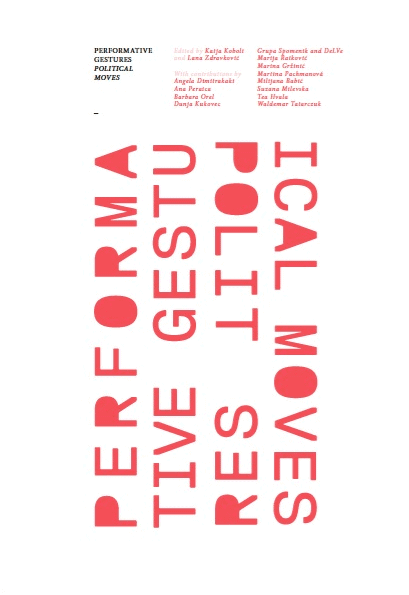 While acknowledging the “problem of performativity”, Performative Gestures Political Moves nevertheless lingers on the term, exploring its echo in the research focused on what should thus also be considered as an effect of the performance of power – on art and theory production in so-called “Eastern Europe”. The book does not (only) represent the research […] 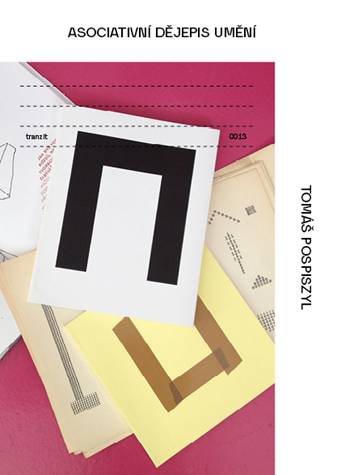 The collection of essays by Tomáš Pospiszyl entitled Asociativní dějepis umění (An Associative History of Art) follows in the wake of his book Srovnávací studie (Comparative Studies) [Agite/Fra, Prague 2005]. It is a set of freely interlinked texts that analyse selected examples of Czech post-war art in chronological order using a similar methodological perspective. While […] 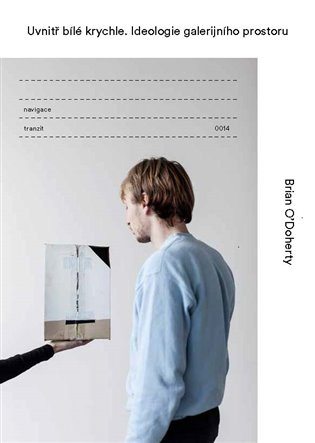 Few essays have garnered as much immediate response as Brian O’Doherty’s Inside the White Cube, originally published as a series of three articles in Artforum in 1976, and subsequently collected in a book of the same name. The story goes that the issues of Artforum containing O’Doherty’s texts sold out very quickly, and as he […] 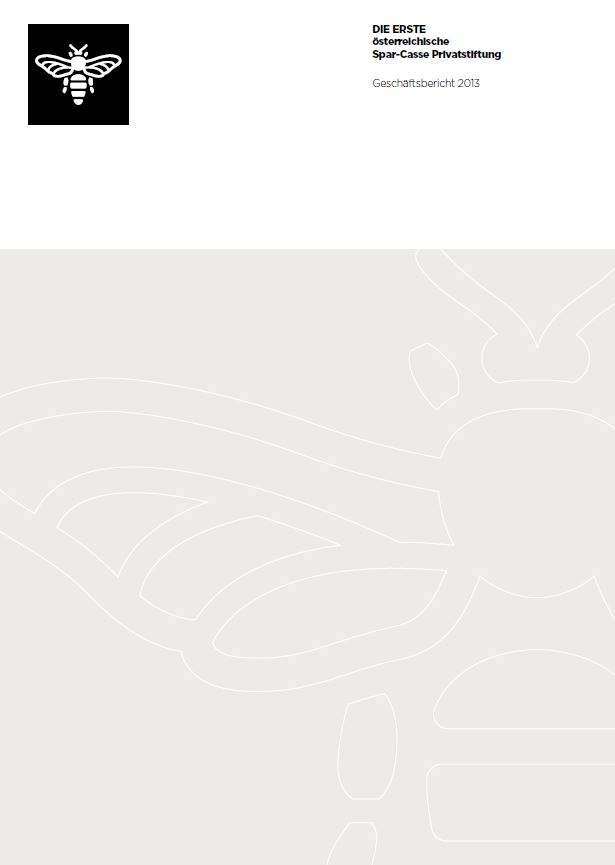 ERSTE Foundation publishes annually a report with information and figures related to its work. The Annual Report 2013 shows what has been done in this year, describing specific projects, their objectives and accomplishments, as well as the highlights of our work. In addition, it provides the foundation’s financial statement and gives an overview of developments […]