How can we realise a holistic concept of prosperity for all today? What will be private and what will be public goods, services, institutions but also responsibilities? How can we lead the profound transformations ahead of us – on climate, technology and on living together – and get those transformations right? Who will forge new alliances of responsibility? Audacity of initiative is what we now need.

How can we realise a holistic concept of prosperity for the many, not the few?

Lecture
Felwine Sarr: How can we realise a holistic concept of prosperity for the many, not the few?

Education as the key to a good future, say stage guests of the fourth Tipping Point Talk

Different perspectives help us approach the topic of prosperity here at the fourth Tipping Point Talk’s stage evening. A short film by Geyrhalter Film, a renowned Viennese production company, opens with a cinematographic kaleidoscope of contradiction from around the globe: Are the blaring people at Munich’s Oktoberfest feeling well? What does prosperity mean for people living in yurts without running water? How do people feel who work in poultry farms that keep chicken in battery cages, or those working in mines?

After Felwine Sarr’s lecture on prosperity, he is joined on stage by five guests: ‘The times they are a-changing’, says moderator Ivan Vejvoda, quoting a Bob Dylan song. ‘Our model of civilisation is questioned not only by thinkers such as Felwine Sarr but, most visibly, by movements like Fridays for Future. It’s time to take these new perspectives into consideration’, he adds.

Shalini Randeria is the first to take up Sarr’s thoughts, especially his notions on how thought patterns have been colonialised by the West, and the necessity for a vision for the African continent. ‘Your thoughts reminded me of Gandhi. He said that the world has certainly enough for all our needs – but not our greed’, she says. Gandhi propagated an alternative model of economic relationships, characterised by local production. But his utopia was never realised. Instead, explains Randeria, independent India took the path of industrialisation and modernisation – with all the socio-economic costs that came with it. According to Randeria, today’s world trade system does not allow for everyone to prosper by design. Powerful private actors– e.g. companies like Facebook and Monsanto – collect and recklessly exploit private data, she says. What people had always considered common goods is now privatised and swiftly commercialised by private firms.

Enter Christoph Badelt. When speaking of economic prosperity, we cannot forgo the question of growth, he says. Some see unlimited growth as the pitfall of the modern age, leading to massive inequalities and environmentally destructive businesses. Yet for others, moderate growth stirs both necessary innovation and political reforms. He questions some of Sarr’s points, saying: ‘I don’t think we need to look for wholly new concepts. The more important question is how we can launch a process of transformation within the political and legal circumstances under which we live today.’

At this point, Romanian banker Sergiu Manea joins the conversation. ‘We all understand our rulebook is dusty and at the brink of failure’, he says, ‘but I would still define prosperity as a smooth interplay between value creation and institutions.’ Rather than looking only at the quantitative accumulation of traditional elements of value, new parameters such as wellbeing are gaining importance. However, access to the whole gamut of values is far from equal. ‘The biggest asymmetries in our societies are due to unequal access to education’, he says, and adds that education, in his understanding, means a mix of skills, knowledge, and critical thinking. While preaching inclusion, we practise exclusion. Manea criticises that ‘we don’t educate children in digital ethics, entrepreneurship or financial literacy. We need to encourage them to face the problems of our time!’

Education is also the keyword for panelist Nikolaus Griller, an industry representative and currently a fellow with the Teach For Austria NGO. Griller says that in Austria, the education system acts as an early divider rather than a guarantor of equal opportunities. ‘Children from families with weaker educational backgrounds start their school careers with lower social capital. Austria has one of the world’s most expensive education systems, and yet we don’t manage to overcome this deep gap’, he says. To him, not doing anything to change the whole system means consenting. Griller explains that Denmark and New Zealand, for instance, are profoundly rethinking education these days. Lessons learned according to Griller: ‘Open up schools, change the format of classroom settings, and focus on strengths, not deficits.’ These attitudes and measures would be key to closing the prosperity gap.

Economy to be aligned with social and political spheres

At this point, the discussion turns to the question of climate change. Economist Sigrid Stagl argues that human prosperity is impossible without considering planetary boundaries in our equations. A Green New Deal, as currently proposed by the European Union, could be the first step towards a prosperous future – if, and only if, politicians took the lead. ‘While we should not underestimate the potential of and the need for individual action, we need to remind ourselves of the importance of democratic and social institutions.’ Markets are of course just another set of such institutions: ‘If we include our norms – when it comes to equality, for example – into the logic of the market, we will also see a different result in society.’ Unlike gravity, we can decide upon these rules. An interdisciplinary approach could help develop an economic system which functions within those planetary boundaries. Philosophy and the natural sciences, she says, could serve as an inspiration.

Felwine Sarr underscores Stagl’s input: ‘If you think of economy as a complex, living being (similar to a metabolism), we need to align it with the social and political spheres’, he summarises. He closes the conversation with a wish: decision-makers should turn the thoughts voiced in the course of this evening into reality. 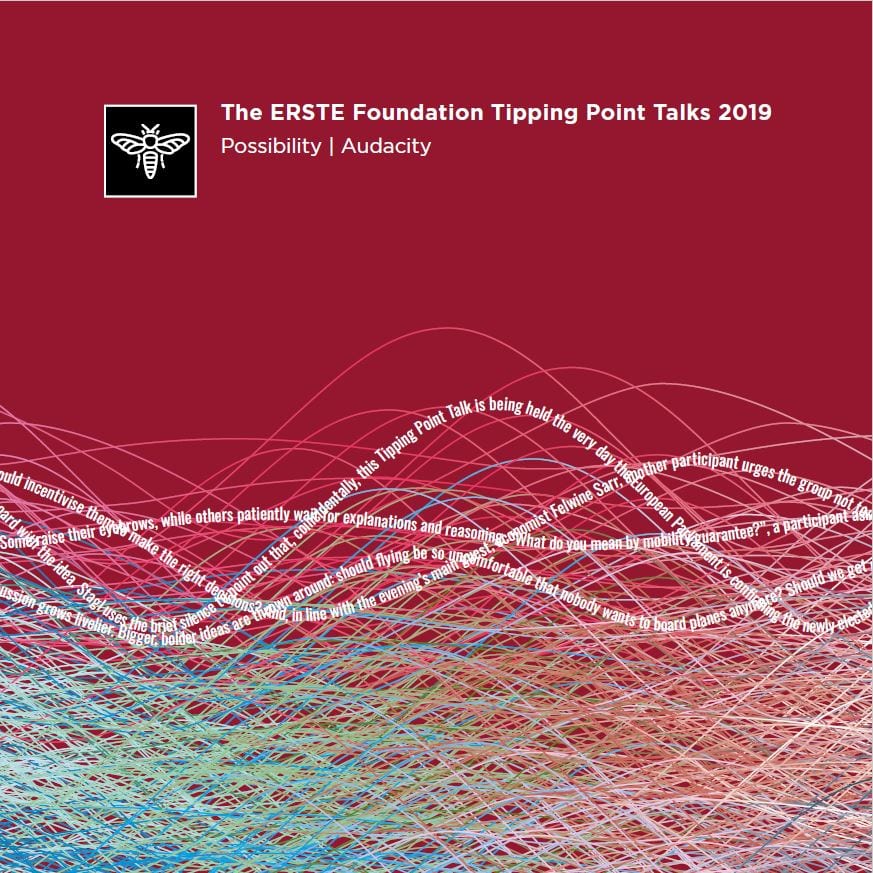